The city of Orange is located in Orange County, California. Orange is unique in that many of the homes in its Old Town District were built prior to 1920. While many other cities in the region demolished such houses in the 1960s, Orange decided to preserve them.

Don Juan Pablo Grijalva, a retired Spanish soldier and the area’s first landowner, was granted permission in 1809 by the Spanish colonial government to establish a rancho in “the place of the Arroyo de Santiago.”

After the Mexican–American War, Alta California was ceded to the United States by México with the signing of the Treaty of Guadalupe Hidalgo in 1848, and though many Californios lost titles to their lands in the aftermath, Grijalva’s descendants retained ownership through marriages to Anglo-Americans.

Since at least 1864, Los Angeles attorneys Alfred Chapman and Andrew Glassell together and separately, held about 5,400 acres along both sides of the Santiago Creek. Water was the key factor for the location of their townsite.

Glassell needed a spot he could irrigate, bringing water down from the Santa Ana Canyon and the quality of the soil may have influenced his choice. Originally the community was named Richland, but in 1873 Richland got a new name. In the book, “Orange, The City ‘Round The Plaza” by local historian Phil Brigandi, it states, “In 1873 the town had grown large enough to require a post office, so an application was sent to Washington. It was refused, however, as there was (and is) already a Richland, California in Sacramento County. The Richlanders proposed a new name – Orange.”

The small town was incorporated on April 6, 1871, under the general laws of the state of California. Orange was the only city in Orange County to be planned and built around a plaza, earned it the nickname Plaza City. Orange was the first developed town site to be served by the California Southern Railroad when the nation’s second transcontinental rail line reached Orange County.

The town experienced its first growth spurt during the last decade of the 19th century, thanks to ever-increasing demands for California-grown citrus fruits, a period some refer to as the “Orange Era.” Southern California’s real estate “boom” of 1886-1888, fueled by railroad rate wars, also contributed to a marked increase in population. Like most cities in Orange County, agriculture formed the backbone of the local economy, and growth thereafter was slow and steady until the 1950s, when a second real estate boom spurred development. Inspired by the development of a region-wide freeway system which connected Los Angeles’ urban center with outlying areas like Orange, large tracts of housing were developed from the 1950s to the early 1970s. 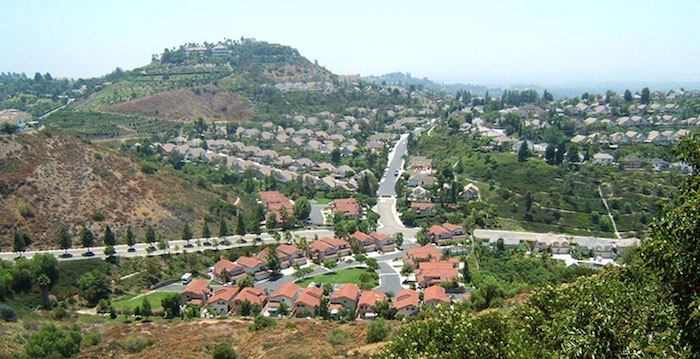