Lake Forest is a city in Orange County, California. Lake Forest incorporated as a city on December 20, 1991. Prior to a vote of the residents in that year, the community had formerly been known as El Toro since the 1880s. Since being incorporated, Lake Forest has expanded its limits to include the communities of Foothill Ranch and Portola Hills. Foothill Ranch and Portola Hills are master planned developments that brought new homes and commercial centers to the Eastern boundary of Lake Forest throughout the 1990s. Lake Forest (along with its neighboring cities Mission Viejo and Irvine) is ranked as one of the safest cities in the country.

The city has two “lakes” from which the city gets its name. The lakes are man-made, and condominiums and custom homes ranging from large to small line their shores. The Lake Forest Beach and Tennis Club and Sun and Sail Club feature tennis courts, gyms, basketball courts, barbecue pits, volleyball courts, multiple swimming pools, saunas, hot tubs and club houses for social events. The “forest” for which the city is also named lies in the area between Ridge Route, Jeronimo, Lake Forest and Serrano roads and consists mostly of Eucalyptus trees.

Lake Forest was born in the first decade of the 1900s when a local landowner, Dwight Whiting, planted 400 acres of Eucalyptus groves in the vicinity of Serrano Creek as part of a lumber operation. In the late 1960s, the Occidental Petroleum company developed a residential community in and around the Eucalyptus groves, which had long since expanded and grown much more dense. 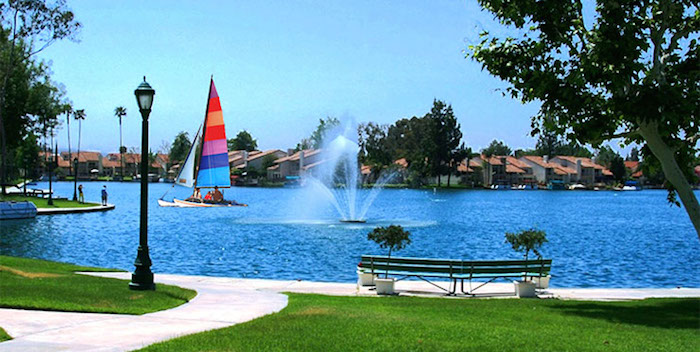